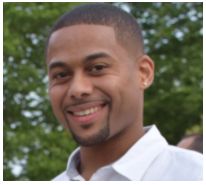 Eliesel Morales was born and raised in Providence, RI in a place called Hartford Projects. He
was raised by a single immigrant mother of four. He grew up in a culture of violence and
non-stop drama which ultimately led him down the path of self-destruction, where he found
himself addicted to drugs and eventually wound up in prison.

Eliesel Morales is now thirty-three years old and he was able to turn his life around. He has
traveled to twenty-two states throughout the U.S., as well as six countries around the world. He
is an entrepreneur, philanthropist and loving father of three. He is Co-founder of
listamundial.com. Their mission is to help Latinos feel included and a sense of community, by
providing solutions to day to day problems.

He is also also a New Leaders Council Alumni ‘16, a graduate of the Citizens’ Troopers
Academy and current member of the board of directors of the YMCA of Greater Providence.
He is a former student outreach worker for the Institute for the Study and Practice of
Nonviolence where he worked to mediate conflicts between students in the middle schools f
Providence and raise awareness of Dr. Martin Luther king Jr.’s ideal of the nonviolent beloved
community.

Currently Eliesel is working on a movement in collaboration with the Rhode Island Dept of
Health to raise awareness about sexually transmitted infections in the state of RI.
Eliesel is determined to have a positive impact on this planet. He will do this by connecting with
like-minded individuals and merging his life’s’ experiences and education to help him resonate
deeply with the community-especially the youth. He will encourage different approaches to age
old problems to inspire positive progress throughout society.